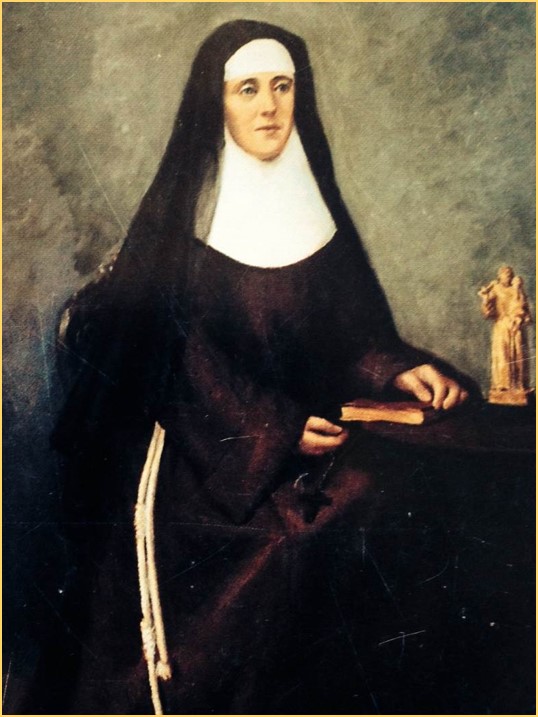 In the mid-nineteenth century Sister Mary Ignatius (Elizabeth Hayes), a convert from Anglicanism, likewise responded to a particular call from God to embrace radical Gospel living.  She received her initial formation in the penitential lifestyle of Francis from the Franciscan Sisters, Glasgow, Scotland, who trace their history to a mid-fifteenth century community known as the Grey Sisters of the Order of St. Francis from Comines, France. On November 26, 1859, Sister Mary Ignatius made her total commitment to Christ; in addition to the vows of poverty, chastity and obedience, she made a fourth vow to dedicate her life to the foreign missions.  It was this vow that led the future foundress to begin her pilgrimage from Glasgow to Jamaica, to Paris, to Rome, to Versailles, to St. Thomas Island, to Boston and finally to Belle Prairie, in 1873.

From a study of the events of these fifteen years of searching for the will of God, it would seem that providence was preparing Sister Mary Ignatius for the real task that lay ahead. Purified by trials, she was learning that complete self-emptying, that utter indifference to success and honor which, as a foundress, she would need.  Like Christ and St. Francis she was a pilgrim living in joyful dependence on God during the long novitiate of her early missionary endeavours.  At each new stage of her journey she continued to say her 'nunc coepi'.  (Let us begin).

When God calls free human beings to enter a covenant, God remains faithful to it and now in the designs of providence the time was ripe for the hopes and plans of Sister Mary Ignatius to be realised.  The year was 1873, the place Belle Prairie, Minnesota, U.S.A., when our branch of the Franciscan family known as Missionary Franciscan Sisters of the Immaculate Conception became a reality in a small one-roomed log cabin. The initial years of guiding the young community were years that called for a depth and breadth of vision that could only have come from a profound faith and a very deep sense that this call to mission was from God and would therefore be sustained by God through even the severest trials. By 1878, the Belle Prairie community could count six professed sisters and a flourishing little novitiate.  Her success only incited her missionary spirit and she turned her attention to the black population of the South, who at that time, were the most underprivileged, deprived and humiliated inhabitants of the United States.  By the summer of 1879 Mother Mary Ignatius and a small community of nine were ministering on the Isle of Hope, Diocese of Savannah, Georgia.  In obedience to the Pope, the novitiate was established in Rome, a symbolic action testifying that our mission was not confined to the peoples of any particular race or country but that it was to extend to the universal Church.

Following the example of Mother Mary Ignatius, our sisters through the years have continued in prayerful discernment to search for the will of God before accepting commitments in the various countries.  In this spirit, in 1898, four years after the death of the foundress on May 6, 1894 a mission was initiated in Fayoum, Egypt. Likewise in 1912 a mission was opened in Montreal, Canada; in 1930 one in Kedron, Australia.  In 1933 a center for vocations to the Institute was inaugurated in Bloomfield, Ireland; in 1949 Australia extended its missionary activities to Papua New Guinea.  In 1970 our sisters from the United States accepted a new challenge in bringing their apostolic services to Bolivia and in 1985 to Peru.  In 1991 the sisters in Canada responded to new missionary challenges in Africa by sending sisters to Chad. Later we would begin a new mission in South Sudan.

The spiritual development of our sisters as well as their response to the complex needs of an expanding Church has always been the prime concern of the Institute.  Called by God's love to follow St. Francis and Mother Mary Ignatius, we are pilgrims on the way to the Most High. Turning continually to God in Christ, we turn also towards all peoples, especially in the persons of the poor and rejected with whom Christ identified himself.  In loving concern for one another, we travel together as those who have here no permanent home or attachment and are always in readiness for whatever awaits us on our journey.  Thus, at all times we should be able to say "nunc coepi".

The 5 S's of Elizabeth Hayes