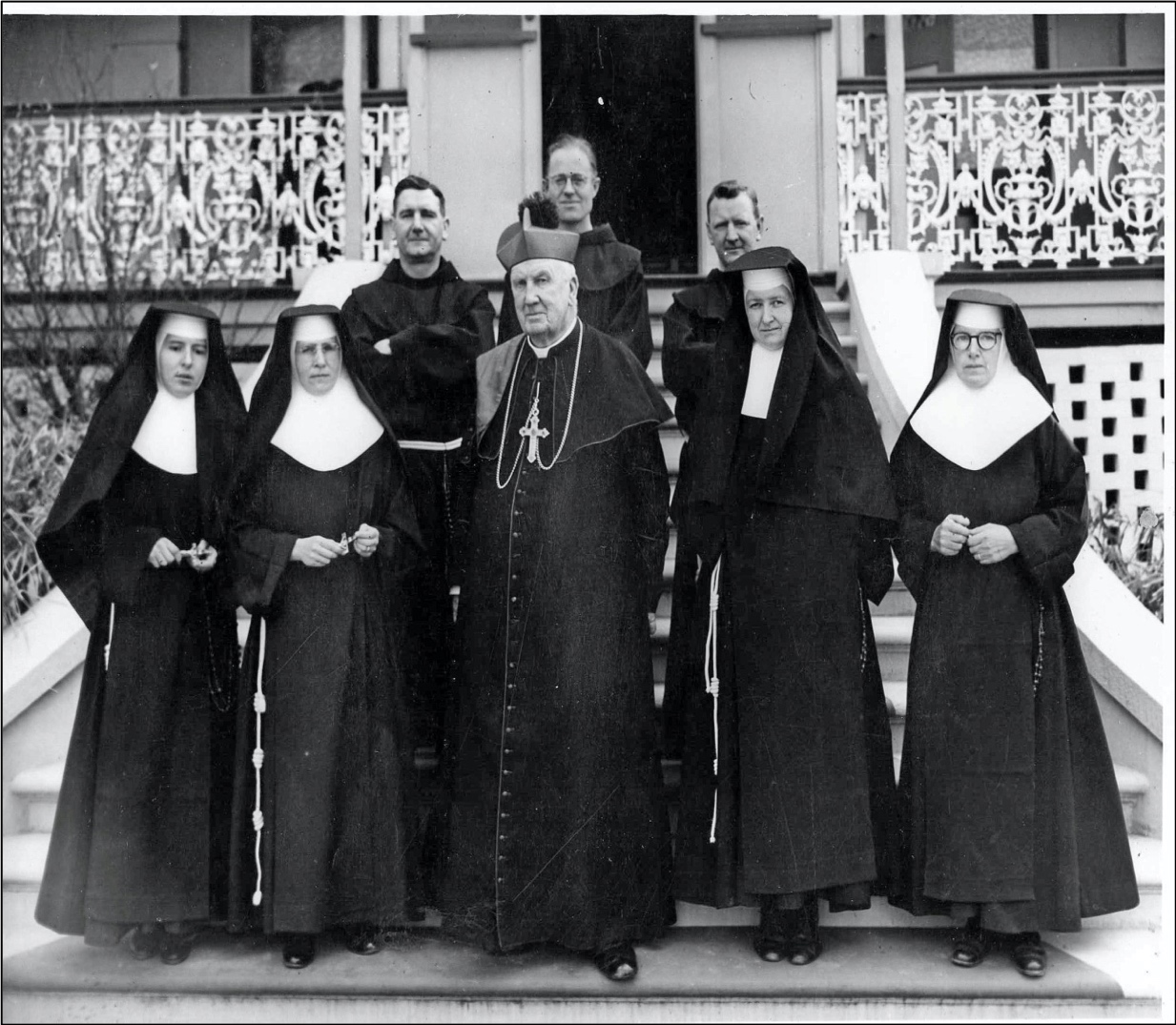 His Grace Archbishop Duhig came to see the sisters off and gave them his blessing.  They boarded the MV Malaita and set out for Madang, in PNG.  There were friars, sisters, friends and St Anthony’s school children present to bid farewell the sisters. 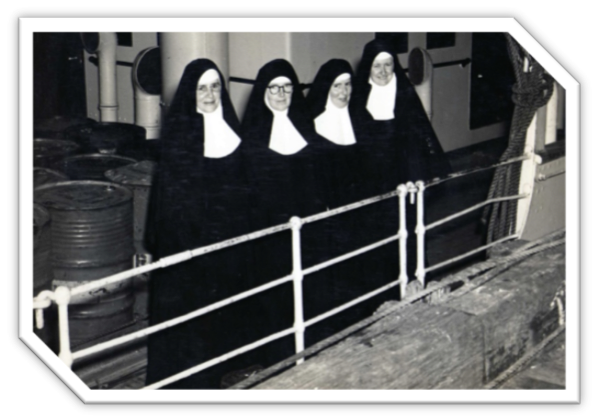 The sisters stood on the deck and waved as the boat sailed down the Brisbane River in the dusk – bound for Sissano, Papua New Guinea, the first mission from Australia to be opened.

The first stop was Samarai (called Alotau today) on Saturday 3rd September. They spent the night on the boat.  On Sunday 4th September Br. Kinnane, MSC (Missionaries of the Sacred Heart) went to the boat from the Sacred Heart Mission on Sideia Island and took the sisters to spend the night in the convent of the Sisters of Our Lady of the Sacred Heart.  The sisters attended Benediction in the mission church and attended Mass the following morning.

Fr. Errol, MSC showed the sisters around the mission and took them back to the MV Malaita. When they returned to the boat, they received a radio message of welcome from Fr. Ignatius Dogget OFM, the friar who invited our sisters to work with women, girls and children in Sissano, Aitape.

On Wednesday 7th September, the MV Malaita left Samarai heading for Rabaul.  After two days the sisters arrived in Rabaul.  Shortly after they arrived, a boy from the Catholic Mission went on board and took them to the sisters of Our Lady of the Sacred Heart.  They stayed with the sisters all day and returned to the boat to sleep.  On the next day Fr. Ormonde, MSC, drove the sisters to Mass.  After breakfast at the convent, Fr. Ormonde took them to Vunapope, the central mission of the MSC (Missionaries of the Sacred Heart). They got a good view of the destruction caused by the World War 2. They also called at the war cemetery where Australian soldiers were buried.

Early the morning of Sunday 11th September the MV Malaita left Rabaul and went to Manus Island.  The next day they arrived into Manus and after the usual unloading of the cargo, the boat sailed for Madang.

On Wednesday 14th September, the Malaita arrived in Madang around 7:00pm.  Shortly after the boat arrived, Bishop Leo Arkfeld, SVD (Society of the Divine Word) and another priest went on board to welcome the sisters.  They arranged to return the next morning and take the sisters to Alexishafen.  On Thursday 15th September the sisters went to Alexishafen.  Mother Agnella and Sr. M. Agnes went in the Bishop’s jeep and Sr. M. Leo and Sr. M. Rose went with Fr. Saiko, SVD.  Jeeps are the usual mode of travelling in this part of the world.  The Sisters called in to see and greet Bishop Appelhaus, SVD.  That day Fr. Saiko took the sisters to see the coconut plantations.  They also went for a boat trip.  At the end of the day the sisters were tired from traveling around to see different places.  That night they slept in a little cottage owned by the Holy Spirit Sisters, having first attended the Holy Hour with the Fathers and Sisters of the Mission. 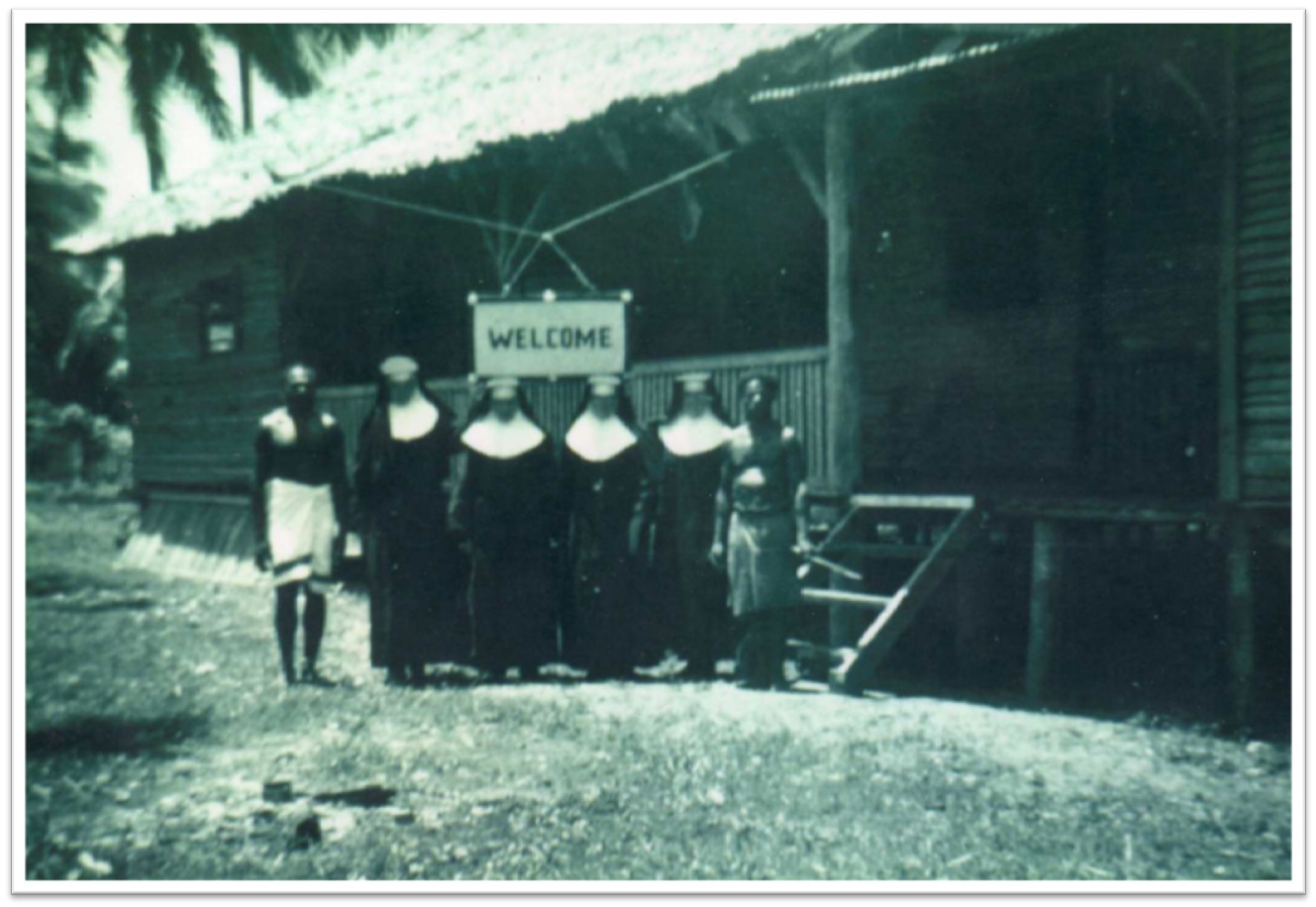 On Friday 16th September, Fr. Saiko called to the cottage for the sisters at 5:00am.  They had Mass at the convent and after breakfast they went back to Madang by boat where they were met by Fr. Hoff, SVD.  After another jeep ride to the airstrip they boarded the little plane (called Dragon) owned by Bishop Appelhaus and piloted by Fr. Hoff.  They set off for Sissano, the place they had been missioned to.  They first landed in Wewak and were taken to the convent of the Holy Spirit Sisters for a cup of tea and something to eat.  After tea they went back to the plane and took off for Sissano.  The plane arrived at Sissano around noon.

At the airstrip waiting were Fr. Michael OFM, and a crowd of people. Fr. Michael gave the sisters a hearty welcome.  All went to the church where Fr. Michael welcomed the sisters in Pidgin, and the children prayed and sang.  They all continued to the convent which was well decorated with natural coconut palm leaves and flowers and a big “Welcome” sign hung from a coconut tree to the convent.  The sisters were now at their new home after the long journey. Fr. Ignatius, OFM and Fr. Anslem, OFM arrived soon after the sisters arrived.

For the Sisters this was a long journey to an unknown land.  Their YES to go to this foreign mission was one of faith, trust and confidence in God’s love.  In the beginning it was not easy to live in this part of Papua New Guinea.  The sisters had to adapt to a new environment, with its own culture, language, food, etc.  Their bondedness in community through prayer, Eucharist, community life, sharing in ministry, helped them to settle in this foreign land.  They were grateful that they had the Franciscan friars who were a great support to them. 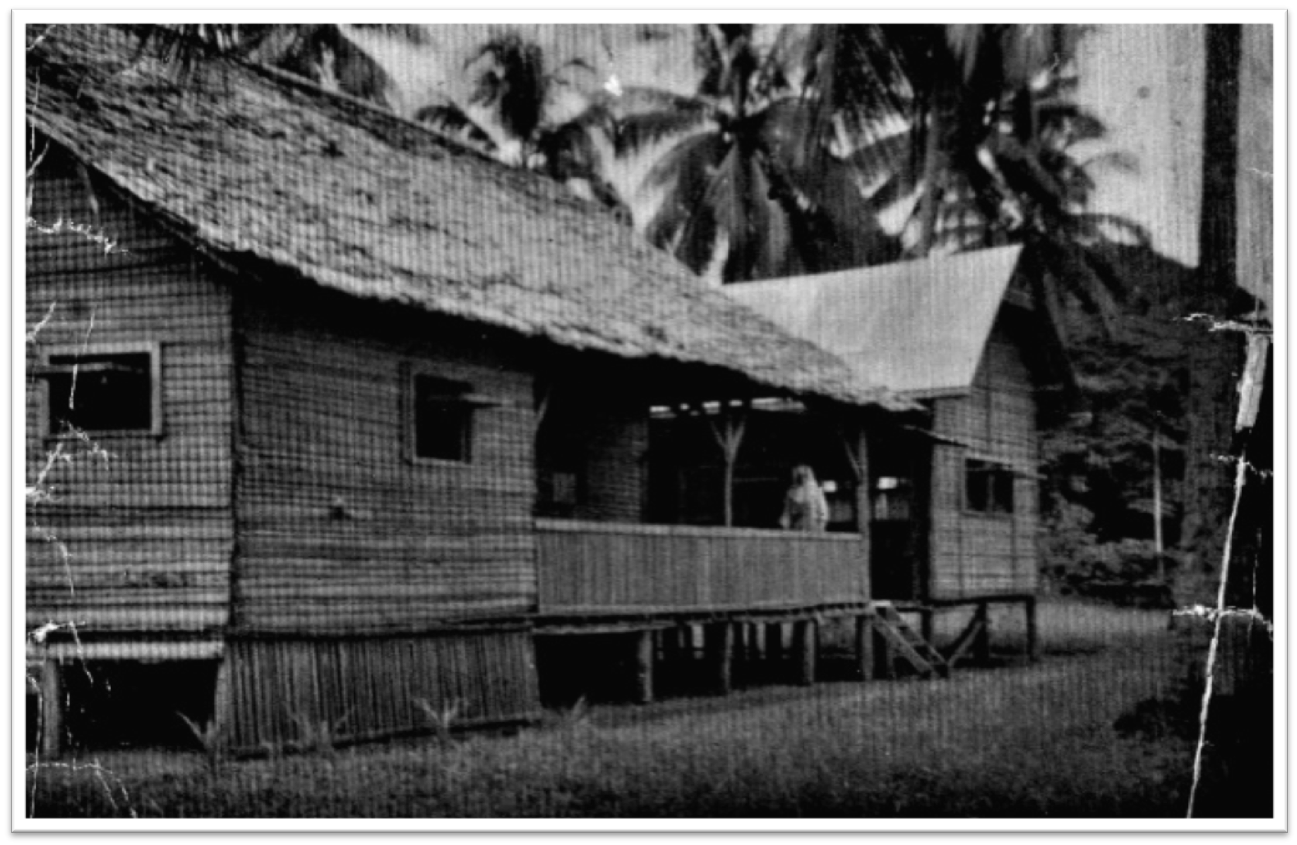 After the first four sisters, they were joined by other sisters who went to Papua New Guinea to continue to be God’s presence of love, peace, hope, compassion, care, reconciliation among the people.  They did this through opening schools, providing health services, engaging in pastoral work and trying to meet the needs of the people and living out the charism of the Missionary Franciscan Sisters of the Immaculate Conception.

Before inviting Papua New Guinean women to join them the sisters served in different parishes in the Diocese of Aitape.  From Sissano they went to Fatima, Aitape, Lumi, Ulau, Wewak and Port Moresby.

A total of 42 sisters were missioned to serve in Papua New Guinea over these past 70 years from Australia, Canada, England, Ireland and the United States.